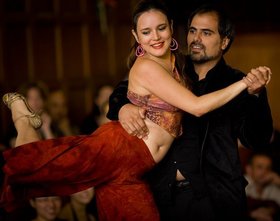 Daniela and Luis met during her first trip to Buenos Aires.  What was supposed to be Luis's last tanda for the night turned into two hours of dancing together. The magical connection they experienced that night led them to share their tango paths. Daniela left her career as an MIT engineering professor to join Luis as his tango partner.  Luis left Buenos Aires to join her in New York City. After many years of living primarily in New York, they recently relocated to Buenos Aires, where they now live when not on tour.

Daniela and Luis' performances have been described as "sensational", "passionate", "musical", and "technically impeccable".  Their dance is based on deep knowledge of the different styles of tango: milonguero, salon, nuevo and stage, which they blend with ease and fluidity to create very personal interpretations.

As instructors, they have quickly gained renown for their deep grasp of body mechanics as well as analytical, logical and detail-oriented teaching style. Their ultimate goal is to help students achieve better quality of movement, develop a comfortable, subtle and sensitive connection with the partner, increase their body awareness and find their own unique voice in the dance. Students in their classes can expect a wealth of information on tango technique, encouragement to push boundaries, lots of hands-on instruction, and a healthy dose of humor to complement the mix.

Born in Mar del Plata, Argentina, Luis started dancing tango in 1994 and became a professional dancer in 1997. He taught and performed forseveral years in Buenos Aires, including performances with leading tango bands Bajofondo and Tanguetto, before tango took him to Brazil, Europe and North America.  Born in Sao Paulo, Brazil, Daniela quit her academic career as an MIT engineering professor to fully dedicate herself as a professional tango dancer. She started dancing tango in 1999 and brings a lifelong training in classical piano to the  partnership.

Daniela and Luis have a full travel schedule that keeps them on the road for most of each year to teach and perform regularly throughout the U.S., in Brazil, Canada, France, Egypt, Germany, Italy, Poland, Netherlands and Norway as well as in Buenos Aires, including several major festivals both in North America and in Europe.  In 2010 they also coached World Champions and Olympic Silver Medalists Meryl Davis and Charlie White in their Argentine tango-based ice dance routine.  They are co-founders of "The Tango Zone Dance Company", which produces shows combining tango, theater, video and comedy.
Return to Staff page